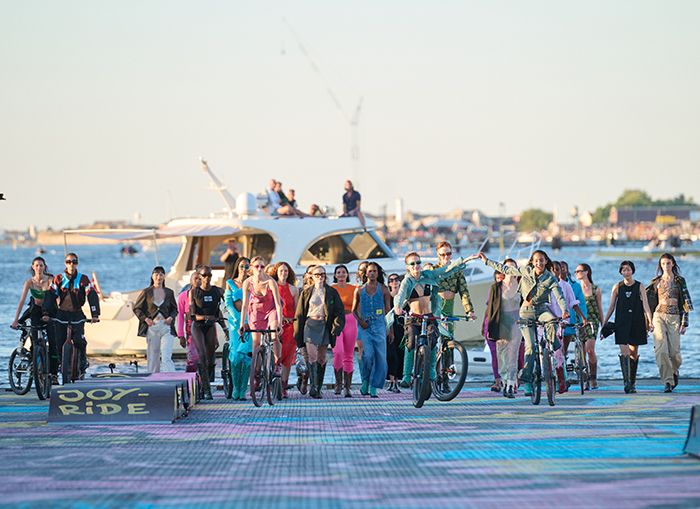 It’s been a long, long time since I last attended Copenhagen Fashion Week, and during that period, the city’s fashion landscape has changed immeasurably. When I came many moons ago, influencers were barely a twinkle in the industry’s eye, the Scandi look still centered on a darkly hued minimalism, and even Ganni was still relatively under the radar. Things have really changed, and the schedule here is now as hyped as can be. Brands that don’t even originate in Denmark now fly their teams and collections in to capture the attention of the new fashion capital’s coolest. Rixo and Rejina Pyo were just a few of the London-based brands in attendance, and it was a pleasure to see them in a different setting. The cachet of Scandi-girl approval is now firmly up there with any of the traditional fashion hubs, and the crowd here can often be credited with starting many of the fashion world’s biggest trends. Flouncy, cloud-like dresses with chunky sneaks or sandals? Crayon brights? Kooky hair clips? All Scandi and all still going strong. The aesthetic has been honed by both the designers and brands of the region as well as the people who wear them with great energy and individuality on the streets.

Rotate’s finale was all about red PVC and girls who just wanna have fun. Naturally, we have the latest street style looks for you to ogle, but this article is about the trends I witnessed emerging on the runways. Within just a few hours of being at Copenhagen Fashion Week, I found the trends that stood out as the strongest contenders. The psyches of Denmark’s designers were clearly aligned, and three shows I saw in a row all featured similar-but-different iterations of a couple of key looks and pieces. The mood? It’s Y2K and sensual, only Scandi-style. So that translates less as whimsical and ultra feminine and more as muted tones (a departure from the city’s normally super-saturated brights), gossamer-thin fabrics, unusual prints, low-slung everything, and sparkle—lots of sparkle! Stine Goya’s see-through sparkly dress and Samsøe Samsøe’s glittering trousers were instant iPhone catnip. Of course, the Danes have a knack for taking traditionally “cute” things and flipping them on their heads. So you’ll find sweet dresses layered over matching mesh flares or a little disco bra top juxtaposed with super-baggy cargo pants. Take Ganni’s collab with Barbour as a great example—those jackets will undoubtedly be styled IRL with sassy little slip dresses.

From the streets to the runways, cargo pants are clearly having a moment in Copenhagen. They came in many forms, cuts and colours, proving that there is a pocketed pant for all! Wear them in a glam way with heels or simply use them as a casual alternative to jeans.

Samsøe Samsøe’s girls were sporty but counterbalanced the look with heels and sunnies.

Cargo pants can be worn by all ages, as proven on the Remain runway.

For all the cargo pants and casual looks on offer, there was a surprising amount of sparkle available. I witnessed multiple see-through crystal-dotted dresses hit the runways, this Stine Goya being my favourite.

Stine Goya was dedicated to sparkle in many forms—note the diamanté shoes and glittering bag here too.

Saks Potts did its cool-girl take on sparkle by pairing a sequin skirt with a classic white shirt.

Samsøe Samsøe’s mesh crystal leggings are going to be so popular.

We’ve become accustomed to seeing the Scandi set in super-bright colours, and while those were still present on the runways, I started to notice a softer and earthier palette breaking through.

For all too long, the minimalistic look has felt size-exclusive—no more, friends!

“Once again, Copenhagen Fashion Week turned heads with their jaw-dropping shows and fashion-forward moments,” fashion consultant Idalia Salsamendi told me. “One of the biggest trends I saw was mixing up and playing around with different patterns. I think it’s real fun when you can take a traditional garment and really jazz it up with a fantastic new print or pattern. Brands like Stine Goya, Munthe and Gestuz really stood out for me this season for this exact reason.”

Stine Goya is known for her vibrant prints, and this one felt particularly fresh for a floral.

Munthe’s geometric-meets-bohemian patterns are totally different from anything else out there.

These 13 Perfumes Will Make You Smell Like a Chic Parisian

Helmstedt’s whimsical doodles will have everyone asking you where your clothes are from.

Even though there was a heatwave, street stylers were very keen on double (or even triple) denim. It seems that designers also got the memo. Ganni’s collab with Levi’s is going to be super popular, but denim on denim comes in many guises as you can see below.

You heard it here first: Denim maxi skirts are making a comeback thanks to Ganni.

Small, sparkly and sassy—that’s how Rotate does denim.

There was no escaping the dedication to Y2K looks that the fashion crowd in Copenhagen had. At some points, it was like living in a Britney Spears music video. Designers also took a cue from the era with low-slung waists, belly chains, layered dresses and denim miniskirts.

Jade Cropper is the new Copenhagen brand to know now, and her entire collection was very noughties.

Chiffon dresses layered over miniskirts and bikini tops were definitely a thing back in the day—now they’re back. Up next, our recommendation on what to buy now.