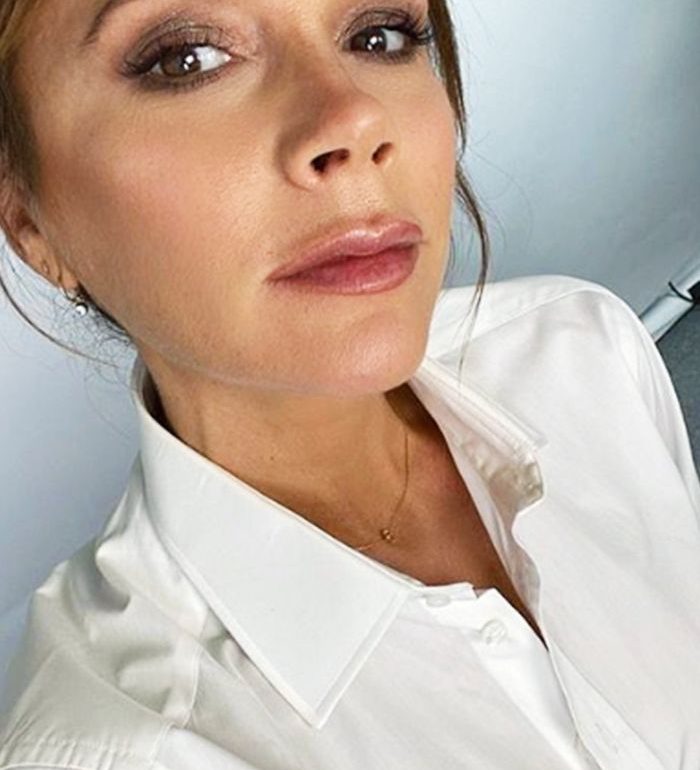 From VB to Meghan, These Are the Perfumes Your Favourite Celebs Actually Wear

Choosing a signature scent isn’t easy—trust me. I’ve spent years trialling hundreds of perfumes in a quest to find The One. From affordable spritzes to blow-the-budget blends, no perfume that I sprayed quite cut the mustard. Why? Because for years I was absolutely convinced that I didn’t want to smell like anyone else out there. I was adamant that I would never become the person who stopped someone on the street and asked what their perfume was because unless I’d discovered it for myself, I didn’t want it.

However, many years (and a whole lot of beauty expertise) later, as I walked to meet a friend, a waft so fierce and feminine kissed my nose that my senses ran away from me, and I more or less chased a lady through a train station to ask her what perfume she was wearing (Frederic Malle Portrait of a Lady, should you be wondering).

Fast-forward to today, and that very perfume sits proudly on my beauty shelf. So while it took me a little while to come to terms with the fact that it’s okay to smell like someone else, I’ve since learned that sharing recommendations is actually a great way to discover new perfumes. And the best people to take inspiration from? The A-list, of course.

Since discovering my beloved Portrait of a Lady, I’ve become obsessed with knowing what scents the people around me hold close to them, and my favourite celebrities are no exception. From Victoria Beckham to Kate Moss, keep scrolling to shop the A-list’s absolute favourite perfumes.

If you’re ever wondering what Victoria Beckham’s beauty secrets are, it’s definitely worth giving her a follow on Instagram. Known for regularly giving a sneak peek into her beauty regimen, VB recently took to Stories to share her love for Vilhelm Parfumerie Room Service, with the caption, “Super Chic!” We’ll take it.

Speaking to Evening Standard, Kate Moss revealed, “I wouldn’t leave the house without scent on.” Her favourites? “Some of my favourites include Clarins Eau Dynamisante, Serge Lutens Fleurs D’Oranger Eau de Parfum and Nadia Narain Lua.  A couple of sprays and I’m done.”

You might have heard of Le Labo Santal 33 before, partly due to celebrities such as Alexa Chung singing its praises. Back in 2012, she told Elle, “I hate overly powerful, floral perfumes. This one is subtle, more masculine. I also have their candle in the same scent burning in my house because I think it’s nice to have a signature scent… All hail Le Labo!”

While you might expect all celebs to wear super-niche perfumes that are almost impossible to get your hands on, Chrissy Teigen’s signature scent is something a little more mainstream. She told E! Online, “Dior Hypnotic Poison [is my signature scent]. It’s in a little red apple bottle. The scent’s not too fruity or too girly. It’s a mix of masculine and sexy.”

According to Vogue Australia, Emma Stone can’t get enough of the feminine scent of Chanel Gardénia, stating that she “takes it with her when she travels and sprays it on her pillow.”

Speaking to Elle Australia, Hailey Bieber revealed that her go-to perfume is Bond No. 9 West Side, saying: “It smells awesome. I like it because it’s not like a super-girly scent, like or a boy or a girl could wear it. And secretly, the reason I know what the scent is is because a boy had been using it, and I was like, ‘I like this for myself, so I’m gonna use it.'” Judging by her description, it sounds like the brand’s West Side perfume is her go-to.

While Byredo Gypsy Water has plenty of celebrity fans, Kate Bosworth is one of the biggest. She told Into the Gloss, “In terms of fragrance, I’m really loyal to Byredo Gypsy Water. [Byredo founder Ben Gorham]’s scents are beautiful and complex and sexy and innocent. There are such incredible layers to what he does. I’m a loyalist with my scents.”

Talking to Marie Claire, Margot Robbie explained that her love for Calvin Klein Deep Euphoria is here to stay: “When I was younger I never really used [to wear perfumes]. I would just use an essential oil or I would plait some lavender into my hair but about a year ago I tried Calvin Klein’s Deep Euphoria and I still love it now! It’s a floral scent, quite a sweet musky rose but it’s feminine and isn’t too strong so I can wear it [every day].”

Although Meghan Markle has had to become a lot more secretive about her beauty regimen since adopting the title Duchess of Sussex, in an old interview with Express, the now-royal revealed, “Fragrance is my favourite thing—so much so that if I leave the house and I don’t put any on, I’ll turn around and go back home. I alternate between a few scents. I love Oribe Côte d’Azur Eau de Parfum and both the Wild Bluebell and Wood Sage & Sea Salt Colognes by Jo Malone.”

Rumour has it that Rihanna is one of the best-smelling stars in Hollywood, with several celebrity pals claiming that she smells heavenly in interviews and on social media. So what’s her secret? According to StyleCaster, a pal of RiRi @stylishgent once took to Instagram to reveal that the singer is a big fan of Love, Don’t Be Shy by Kilian.

Next up, 30 celebs and fashion girls that are making me want to chop off all my hair.