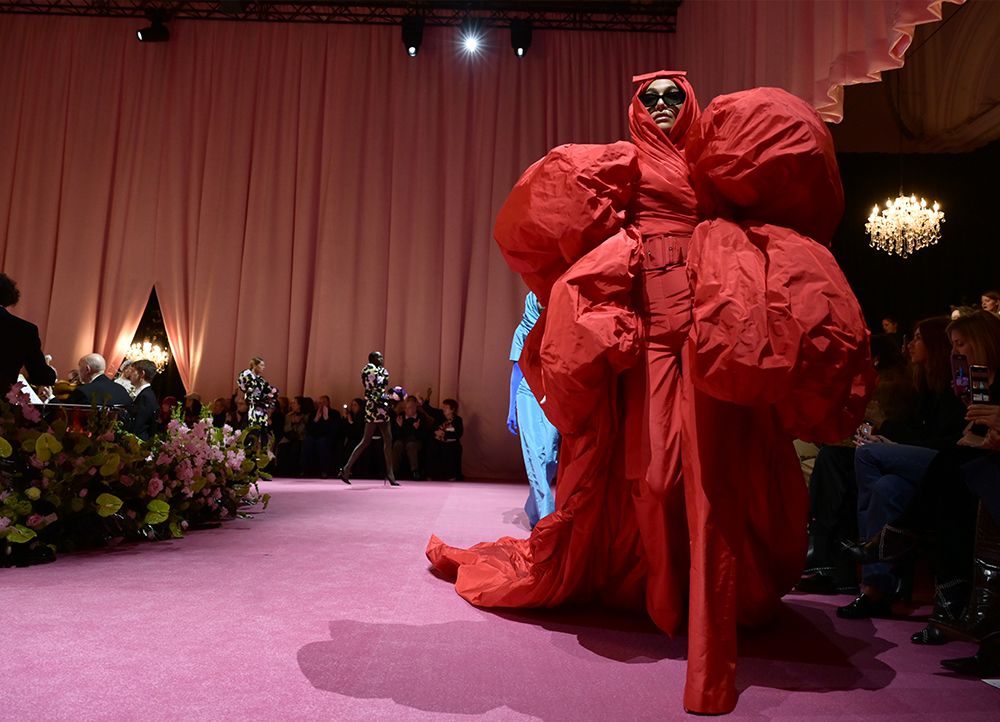 EN-ER-GY! After settling back into regular life after a very fabulous stay at The Londoner Hotel for London Fashion Week, and combing one by one through all of the runway shows, digital look-books and videos that were released over the past few days, I can literally feel the high-octane buzz all over again. London may not have had its gigantic designer blockbuster moments of years gone by, but it’s always been about innovation, burgeoning talent, vibrant street style and pushing the boundaries anyway, and this February’s line-up delivered it by the truck-load, old-school style.

Where the past few seasons have almost willed us into a new, post-pandemic era of possibilities, this time it actually started to seem, well, real. Maybe we could go to those parties after all. Maybe we will have an excuse to get dressed up. Maybe, just maybe, that dust-covered suitcase and holiday capsule will finally catch some Vit D. But more than the options ahead of us in terms of the social calendar, London’s designers were thinking of the bigger socio-cultural opportunities too. The LFW circuit was full of gender-fluid collections and pieces (a move that has been helped along by the mens’ and womens’ schedules merging); agenda-setting new ideas when it comes to sustainable fashion, particularly in the realm of upcycling (longer-standing designers donated pieces to Matty Bovan’s collection to great effect) and greater diversity on the runway allowed many of us to finally see ourselves reflected in high fashion clothes. There’s still a way to go within all of this realms, but it’s a cracking start that other cities should pay attention to.

Richard Quinn. What’s more, amongst the avant garde pieces that might trip a switch on TikTok, there were plenty of looks that could translate into any given wardrobe in an instant. Those are the trends I’m focusing on here because I came away with a long list of pieces I’d love to get my hands on, and it’s only right to share that with you. So below are the 9 London-led trends I want to try ASAP.

Eudon Choi is known for his tailoring and his coats really stood out this season. Oversized and traditionally masculine in shape but with modern twists like big flap pockets and these salmon and tan stripes.

Edward Crutchley’s white coat is not only a stunner, I can also see fashion people copying his tied styling idea next autumn.

Pronounce’s oversized coats are great in both colour and silhouette. Expect to see larger silhouettes come next autumn, and by cinching a waist this shape can work better for anyone more petite or curvy.

Goddess dresses are my new term for this ongoing London-led trend for beautifully draped and ruched columns. It’s a Richard Malone signature and this grape-coloured one is divine.

Vivienne Westwood, of course, started it all many decades ago and hers remain some of the most flattering and timeless around. This new iteration ticks all the boxes: Innovative drapery, cool colour, interesting fabric.

They come in slinkier, sassier forms too and we saw a great deal of barely-there pieces during LFW. Supriya Lele’s versions will no doubt be a hit with the Gen Z crowd.

Sparkle, but make it fashion! London designers have a penchant for anything shiny but they always make it edgier through unusual combinations. Take Simone Rocha’s cable knits and sheer fabric juxtaposition here. A masterclass.

16Arlington’s show was full of ethereal party pieces, but this was one my absolute favourite. Mermaid green sequins, who knew?

Celebrities adore David Koma for his full-throttle party frocks and this collection provided plenty for the A list to get excited about. He used jumbo crystals and emeralds on black for a striking finish.

Black leather came down the runway in many forms. Some looks were quite severe and gothic, others felt much more joyful, like this flirty dress from Maximilian.

Raf Simons isn’t technically part of the LFW schedule but his collection was released at the same time and definitely spoke to a similar mood. Patent coats are back—again!

Poster Girl’s debut show was full of teeny tiny ensembles but it was this full leather get-up that caught my eye.

Quite possibly my top look from the entire LFW circuit, this fairisle knit and tulle skirt from Molly Goddard was a triumph.

There’s clearly a shift towards bigger silhouettes for AW22, and it works with separates too. This camel knit and shiny skirt combination from Christoper Kane is just so cool.

Matty Bovan’s double-layered skirts, oversized sweatshirts and belted waists gave me a great deal of inspiration to dig into my existing wardrobe and see what I can cook up to reflect this formula.

The dress we want WAY ahead of AW22—Rejina Pyo’s lovely neon midi will look good forever.

Emilia Wickstead combined camel with chartreuse and it’s a pairing that really works.

These 3 Dress Styles Are So Right Now, and I’m Here for It

There were many, many great looks from Roksanda’s show but the editors were unanimous in wanting to own this incredible, fringed, striped jumper-dress.

Ahluwalia’s preppy combination of a striped polo with a contrasting print is one to definitely ruminate on.

Daniel Fletcher often uses collegiate stripes, but setting retro lines against a leather jacket was a nice twist for AW22.

There were hints of the ’80s all over the runway (even if the noughties are still holding strong) and many of the looks reminded me of the kinds of things my mum wore in the ’80s, or perhaps from Princess Diana’s more casual oeuvre. This tartan Paul & Joe dress is definitely reminiscent of that time.

Straight-leg jeans tucked into leather boots? VERY ’80s. This Rejina Pyo ensemble is going to inspire many to give it a try.

Lamé party dresses are the epitome of fancy ’80s attire, and RIXO gave new life to the idea for their joyful party-focused autumn collection.

This cornflower blue Temperley suit was remarked upon by many an editor when designer Alice Temperley held one-to-one appointments at her studio.

Ozwald Boateng’s triumphant show and adjoining celebration of Black culture was undoubtedly the highlight of LFW. His suits are second to none and we’d take this one right off the model’s back.

SS Daley’s full-legged trouser suits provided a new silhouette for those of you who like a bit more swagger in your tailoring.

Next up, the London street style looks we loved.